Now that you know all of that, you can use software libraries to expand what Processing can do.

A library is a bunch of code that other people have already written, which you can add to your own sketch to expand Processing’s functionality.

Libraries give you access to new classes that contain functions that let you run the library’s code without really worrying about exactly how it all works.

To use a library, you have to add it to your sketch. There are a few ways to do that: 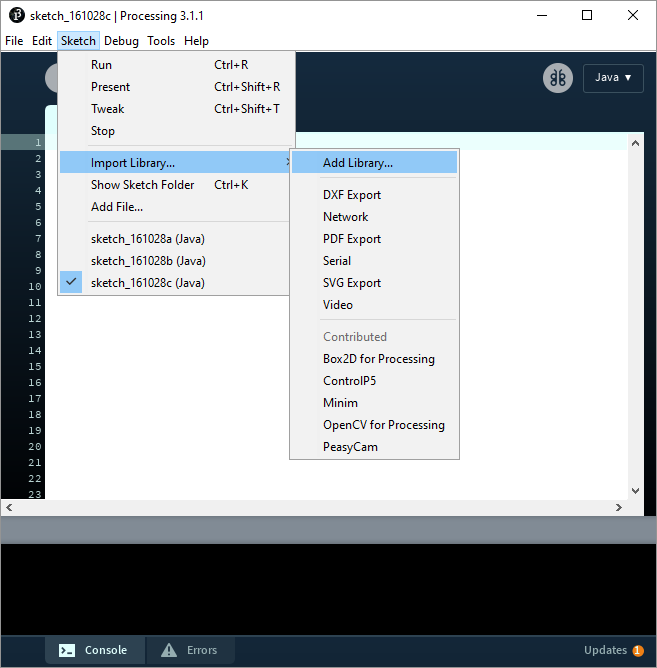 This brings up the Contribution Manager: 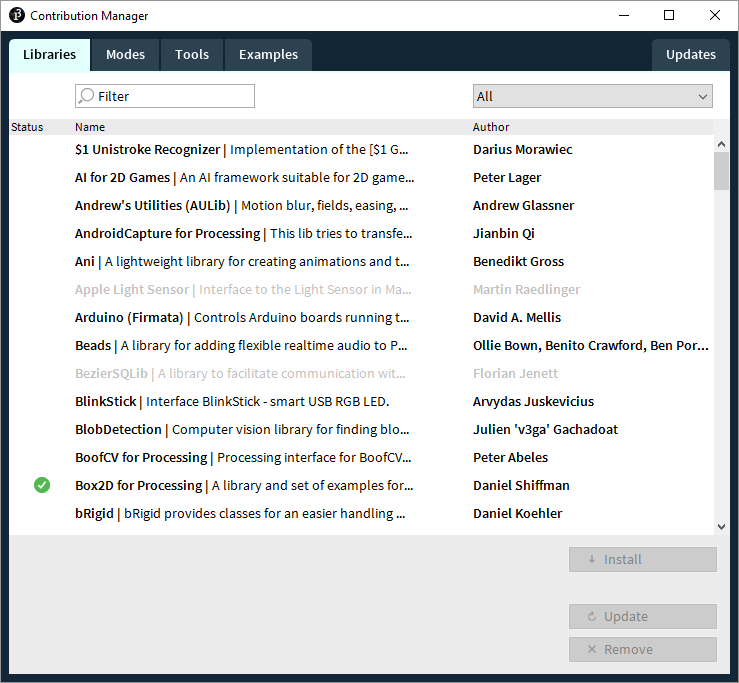 This shows you a list of libraries that are specifically designed to be used in Processing. Find the library you want, then click the Install button in the lower-right corner. After a minute or so, a green check mark will show up next to the library, and you can close the Contribution Manager.

You aren’t done yet! That step downloads the library onto your computer, but you still have to add it to your sketch. Go back to the Sketch menu, then Import Library..., and then click the name of the library, which should be in that menu now.

Usually you’ll see some import statements added to the top of your sketch. This means you’re ready to use the library!

The Contribution Manager lists a few of the libraries that can be used in Processing, but there are many others out there. In fact, since Processing is built using Java, you can use any Java library in Processing!

Usually these libraries are packaged as a .jar file, which you first have to download onto your computer.

When you have the .jar file, you can add it to your sketch by dragging the file onto your Processing editor.

Now that I have the .jar file, I can add it to my sketch by dragging the file onto my Processing editor.

If you aren’t familiar with import statements, here’s a brief introduction:

Libraries organize their classes into packages, which is like a directory that holds classes. To use a library class, you have to do two things: first you have to add the library to your sketch (which you do via the Contributions Manager or by dragging a .jar file onto the Processing editor), and second you have to import the classes from their packages.

A wildcard import looks like this, and it’s what the Contributions Manager does:

I personally prefer using explicit import statements because it makes it more obvious exactly what classes you’re using, but unless you’re using two libraries that have classes with the same name, either approach is fine.

Looking through the Handy documentation, you can find the HandyRenderer class, which tells you that this class is in the org.gicentre.handy package, so the explicit import looks like this:

Now you can use the HandyRenderer class in your sketch!

Now that you have a library added to your sketch and its classes imported, you can use that library.

Every library is different, so you have to consult your library’s documentation to know exactly what classes you can use, and what functions those classes contain.

For example, this tutorial contains examples on how to use the Handy library, including this one: 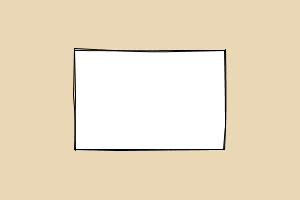 Here’s a more complex example that uses he Handy library: 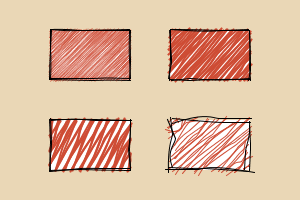 This code calls various functions in the Handy library to draw four rectangles with different styles. To understand this code, you don’t need to worry about how Handy works internally. That’s the whole point of using libraries: they let you do cool stuff without writing all of the code yourself!

By now you’re probably pretty accustomed to looking stuff up in the Processing reference, reading example code, and trying stuff out. That’s exactly what you do with libraries: consult their documentation, read example code, and then try something out.

There are a ton of libraries out there: libraries for computer vision, image processing, artificial intelligence, physics simulations, robotics, you name it. Using libraries really opens up the possibilities of what you can do with code, so don’t be afraid to get creative!

Use the Minim library to play random piano notes.

Use Minim to play and record notes.

Use the Minim library to play random synthesizer notes.