Processing uses an absolute coordinate system for its drawing functions, but other programming languages like Logo use a relative system called turtle graphics.

In turtle graphics, you control a “turtle”, which you can think of as a pen. You can tell the turtle to move forward (which draws a line) or rotate, which makes it face a different direction. You can also change the turtle’s color, whether it should draw while it moves, etc.

The idea is that turtle graphics are a little easier to think about than an absolute coordinate system because you just have to imagine what the turtle would be doing, and you can design some pretty cool-looking things this way.

This program uses a few variables and functions to recreate turtle graphics in Processing.

I borrowed this algorithm from Secret Coders, which is an awesome kids book that I highly recommend! 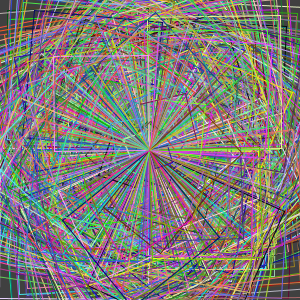 Use functions to create a pen that you can rotate and move.