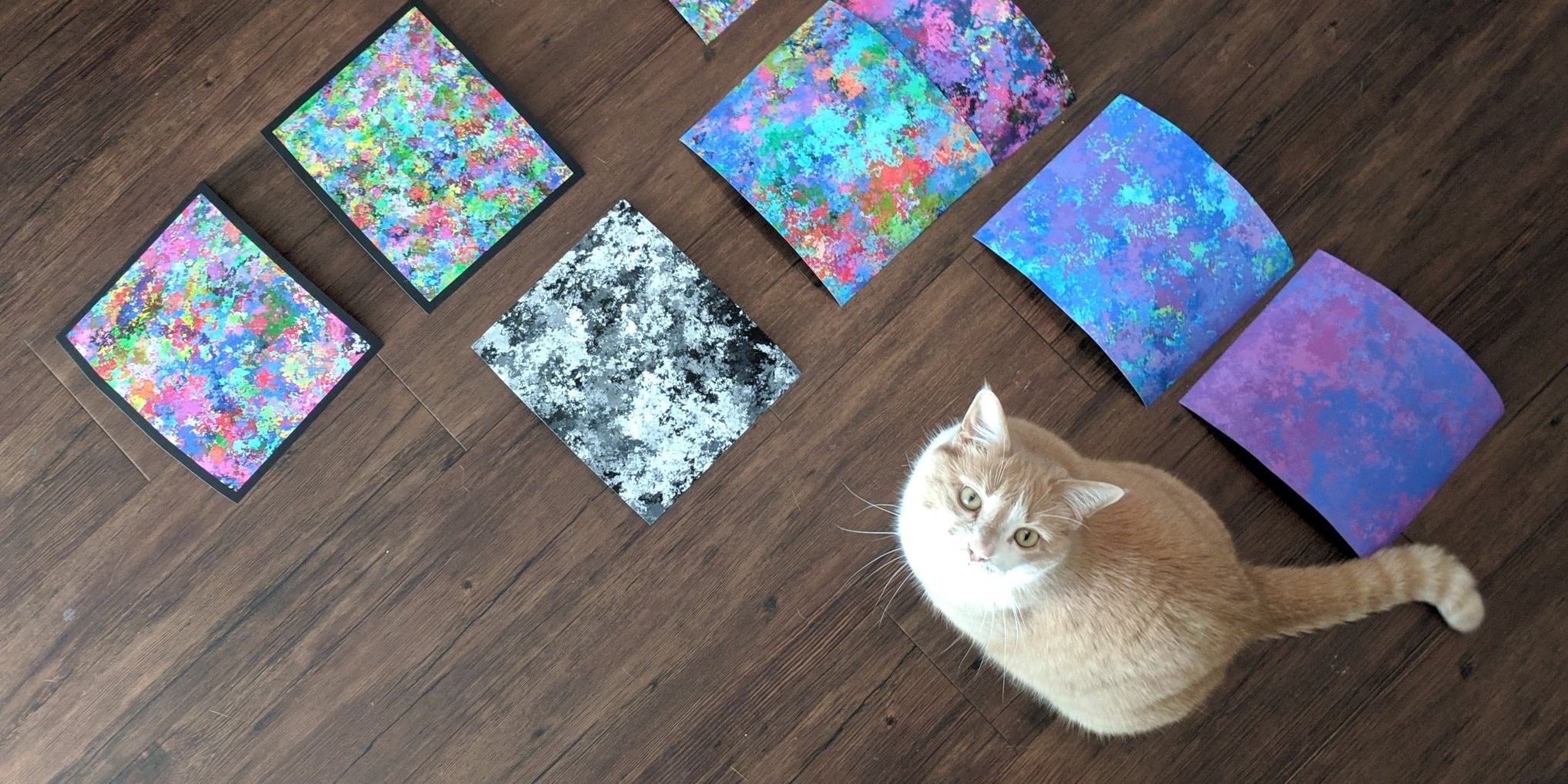 One of my goals this year was to play around with physical prints of digital art. Thanks to having a few free weekends, I’ve figured out how to create physical prints, and I’ve created an Etsy store!

If you want to learn more about that process, or if you want to create your own Etsy store, check out this tutorial. This blog entry will talk more about the subjective experience I had while going through the process.

This ended up being much easier than I expected. I’ve been thinking about this for years now, and I had an assumption that went something like this: “Wow, people who have physical prints are real artists, that must be really complicated, maybe someday I’ll learn how to do that.”

So it’s almost a little embarrassing that it turns out to be really simple: you create an image file, you upload it to Printful, and a week later your prints (or t-shirts or whatever) are at your door.

And it was really, really cool to see my code out in the real world. The first thing I printed was a poster version of the movie colors project I’ve been playing around with. I was a little worried that it wouldn’t translate well: I’m squishing each second of a movie (all 7,200 of them) into a few inches of paper. I didn’t know whether it would come out blurry, or too dark, or just ugly.

But I’m really happy with the results: 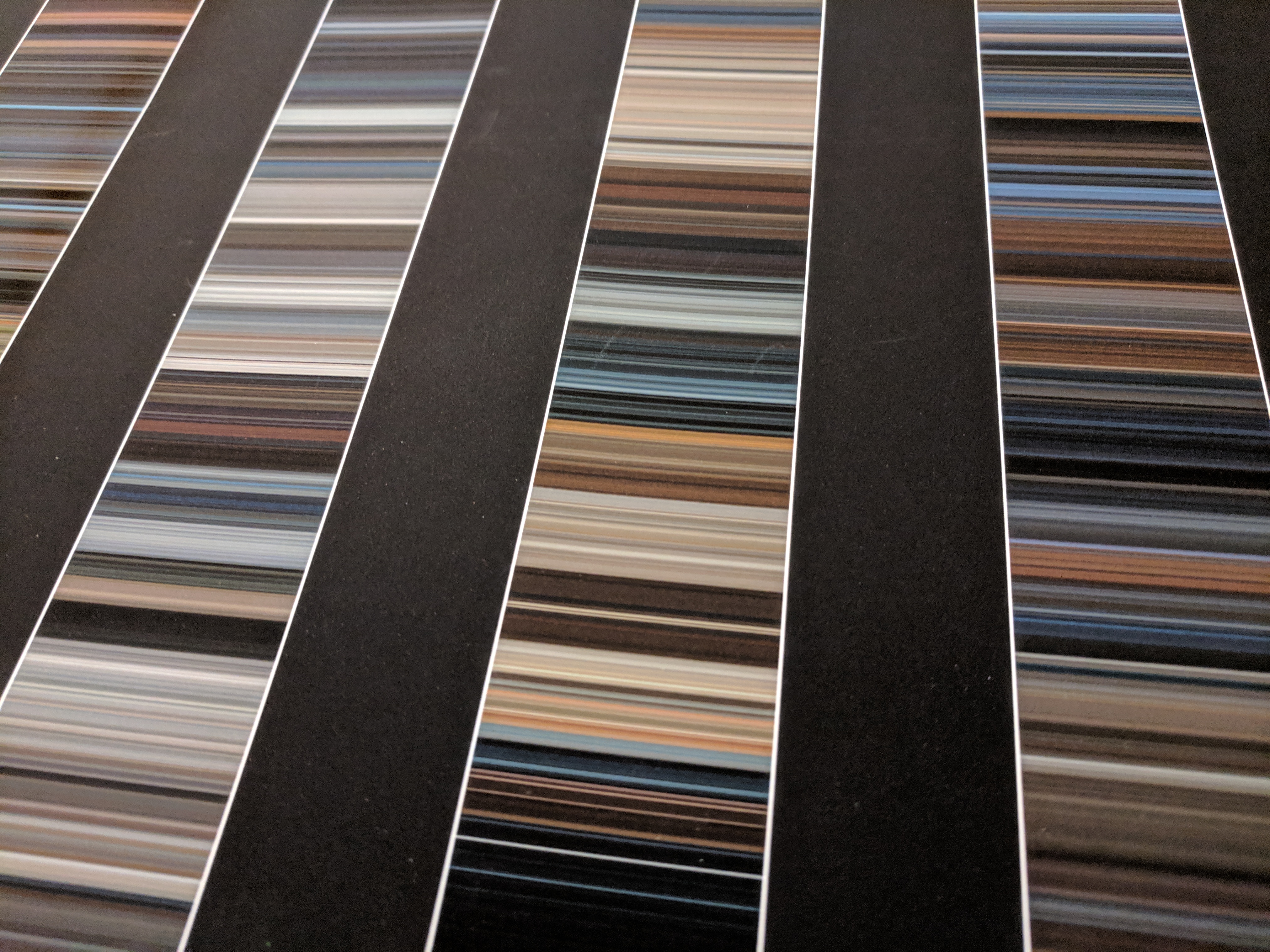 You might know by now that I’m a little obsessed with the random walker algorithm. I think it’s a great example of emergence, and it’s fun to play with the parameters to get completely different outputs.

So it’s probably not too surprising that this was the next thing I tried printing out: 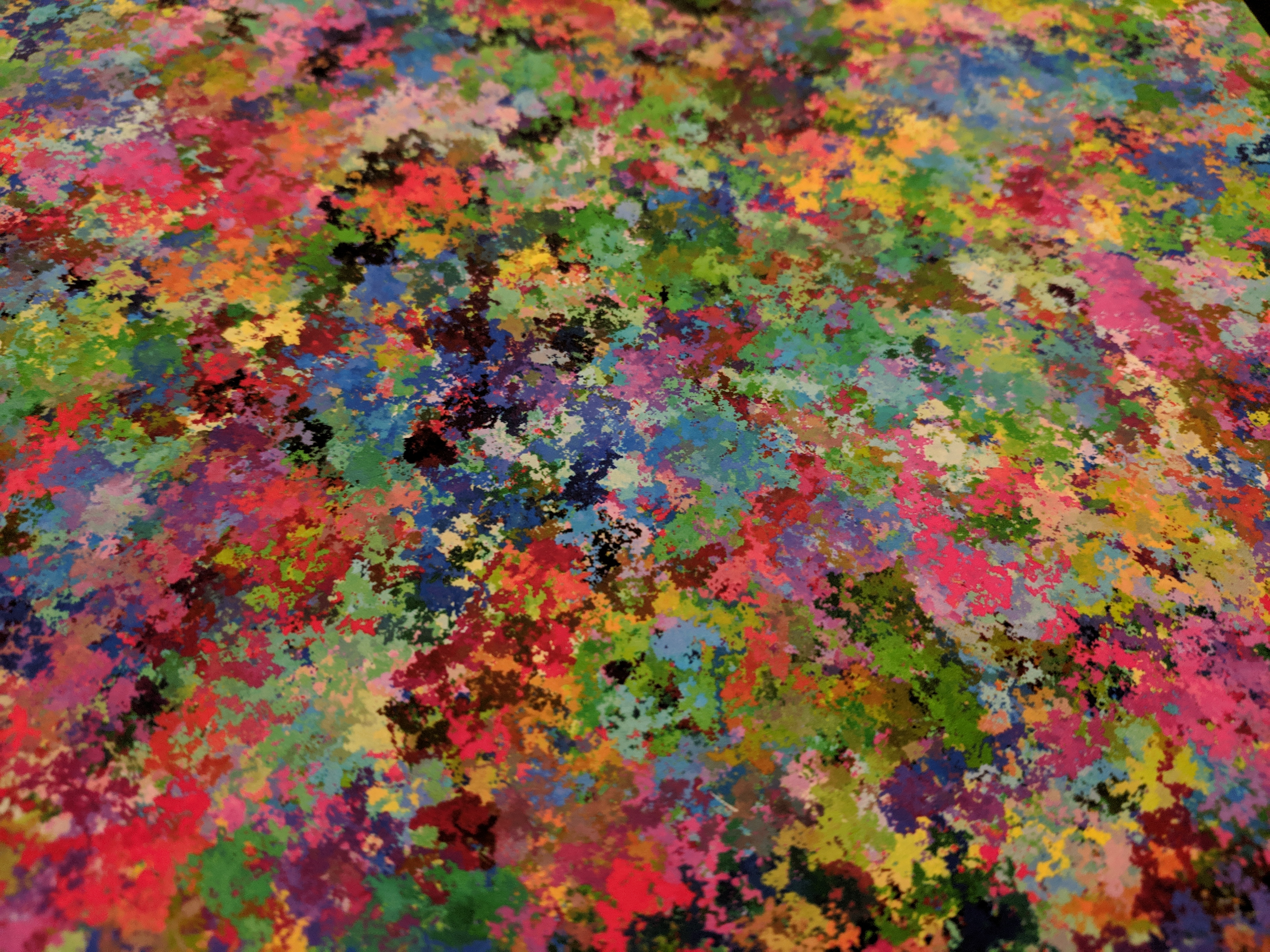 And it was just really cool to see something I created with code out in the real world. 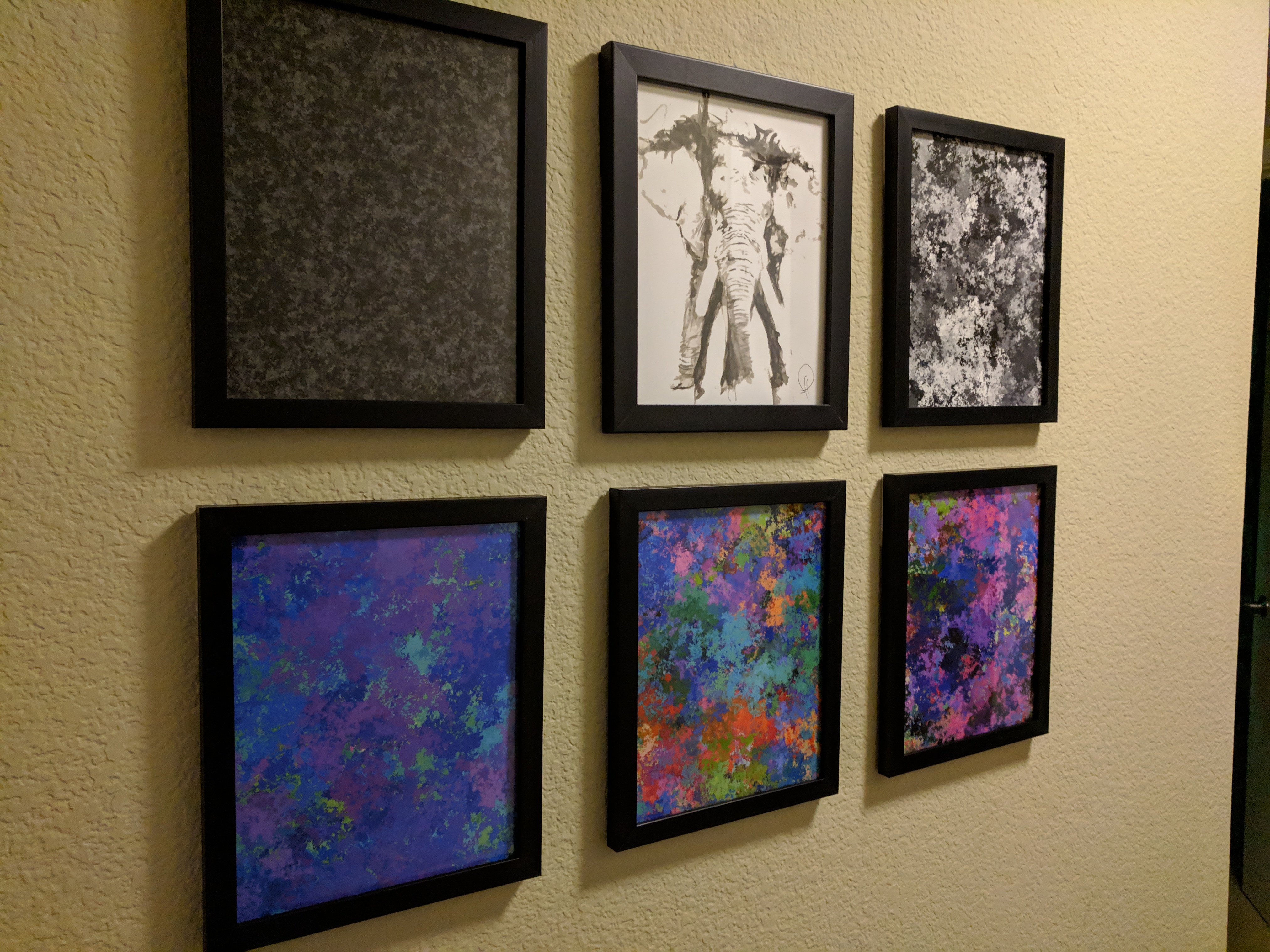 As I went down this rabbit hole, I ended up checking out other Etsy stores- there are a bunch of people making some really cool stuff out there, and I was surprised by how depressing that was for me. It was a little frustrating and disheartening to see other people doing similar things way better than I am. I don’t consider myself an artist, but I gather that this is a pretty common feeling among artists. I’m no stranger to impostor syndrome, so I’ll keep making my “art” even if it’s not the best thing in the world.

Another thing that surprised me was how expensive this is. Granted, I sought out the most convenient process instead of the cheapest (or most profitable), and I don’t plan on making any money off of this. But I do feel for people trying to make this their full-time job.

To be specific: Printful charges $18.00 for a 24x36 inch poster print. This isn’t a bad price by itself if I just want something for myself, but if I then want to sell that print to somebody else, I have to add my own markup on top of that cost. So if I charge $25.00 for that poster, I’m really only making $7.00 from the sale. Again, I don’t really care about the money, but it was interesting to see how this side of things works behind the scenes.

One last thing I noticed was: playing around with this stuff is just plain fun. It’s fun to play with the code to see what output you get, and it’s even fun to tweak what shows up on Etsy. But this means that it also takes up time. This might be okay if you’re looking for a new hobby to get into, but I already feel like I have too many things to do and not enough time. I’ll try not to use this as an excuse to procrastinate from the other stuff I should be doing too much. 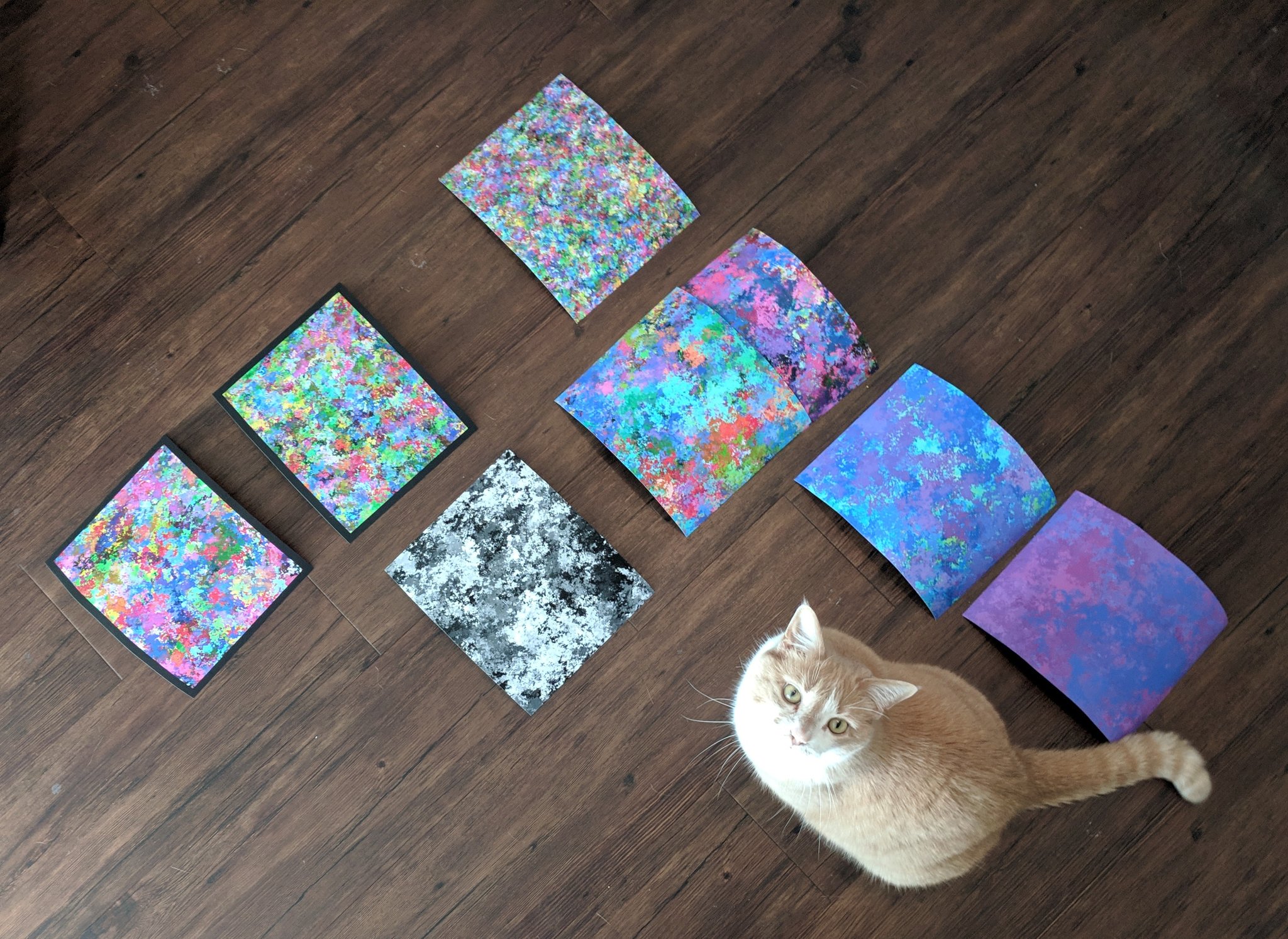 Stanley has wares if you have coin.

Like I mentioned above, I don’t consider myself an artist, but I would like to keep playing around with this. There are a ton of cool algorithms and visualizations I think would be fun to explore. Stuff like cellular automata and Perlin noise would make for some cool art.

I’d love to make the process more interactive- something like a page where you play with the parameters to create your own print. That’s probably more work than it’s worth, which probably means I’ll do it next time I’m procrastinating.

I’ll also keep my eyes peeled for a California version of Artomatic - if anybody has any suggestions, let me know in the comments!