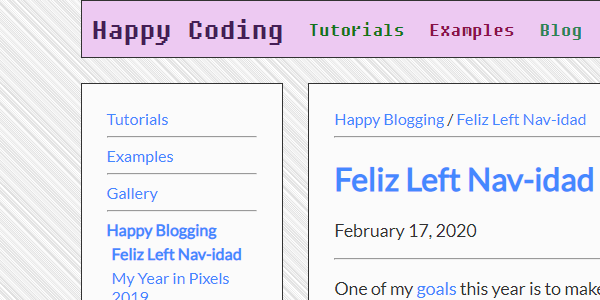 One of my goals this year is to make this site feel more like a journey rather than a collection of disconnected tutorials. I fall asleep as soon as anybody starts talking about “user retention” or funnels, but I wanted to make it more obvious how everything fits together, the order of things, and what you should do next after you finish reading a page.

So, I spent this long weekend adding a left nav to the site. Here’s a timelapse of the process:

This came together relatively quickly, mostly thanks to the magic of flexbox. I briefly considered going with a full-width top nav, but decided to stick with having different sections centered in the page. I fall back to this pattern pretty often, but I think it works pretty well.

When all you see is the finished product, it’s easy to assume that its creation was a one-step process. This can be especially unhealthy for beginners who take that as evidence they don’t belong. “I don’t know how to add a left nav to a website, therefore I must be bad at web development!” As a creator, it’s also easy to hide behind this misconception, to only show the polished end result to the world. But I think it’s important to demystify the process of problem-solving, and to show that research and debugging is a natural part of coding.

With that in mind, here’s everything I googled while implementing the new left nav:

I googled 80 things this weekend, ranging from fundamental concepts, to syntax quirks, to error messages. You can see me get distracted by going down a rabbit hole of updating Jekyll, which ended up improving my build time by 100x! I also spent a couple hours debugging the layout on mobile devices, which ended up being an existing problem caused by a single line of CSS on the blog homepage. And just to be meta, I’ve included what I searched while writing this post.

In the name of demystifying this process, I want to point out that I do the same kind of research at my job. I’ve been programming for almost 15 years, I’ve been a “software engineer” for over 11 years, and I’m currently the TL of a frontend team at Google. But I still have to google every time I want to align two divs. So if you feel like you have to research everything, or like you encounter errors every 5 minutes, don’t worry- that’s normal!

Anyway, I’m pretty happy with the end result. Flexbox is magic to me, so I’m still getting used to not specifying every width myself and trusting the layout to do all the work for me. I’ll probably keep tinkering with it, but for now I think it improves the overall flow of the site.

Let me know what you think, and feel free to post your own google search history if you’re brave enough!