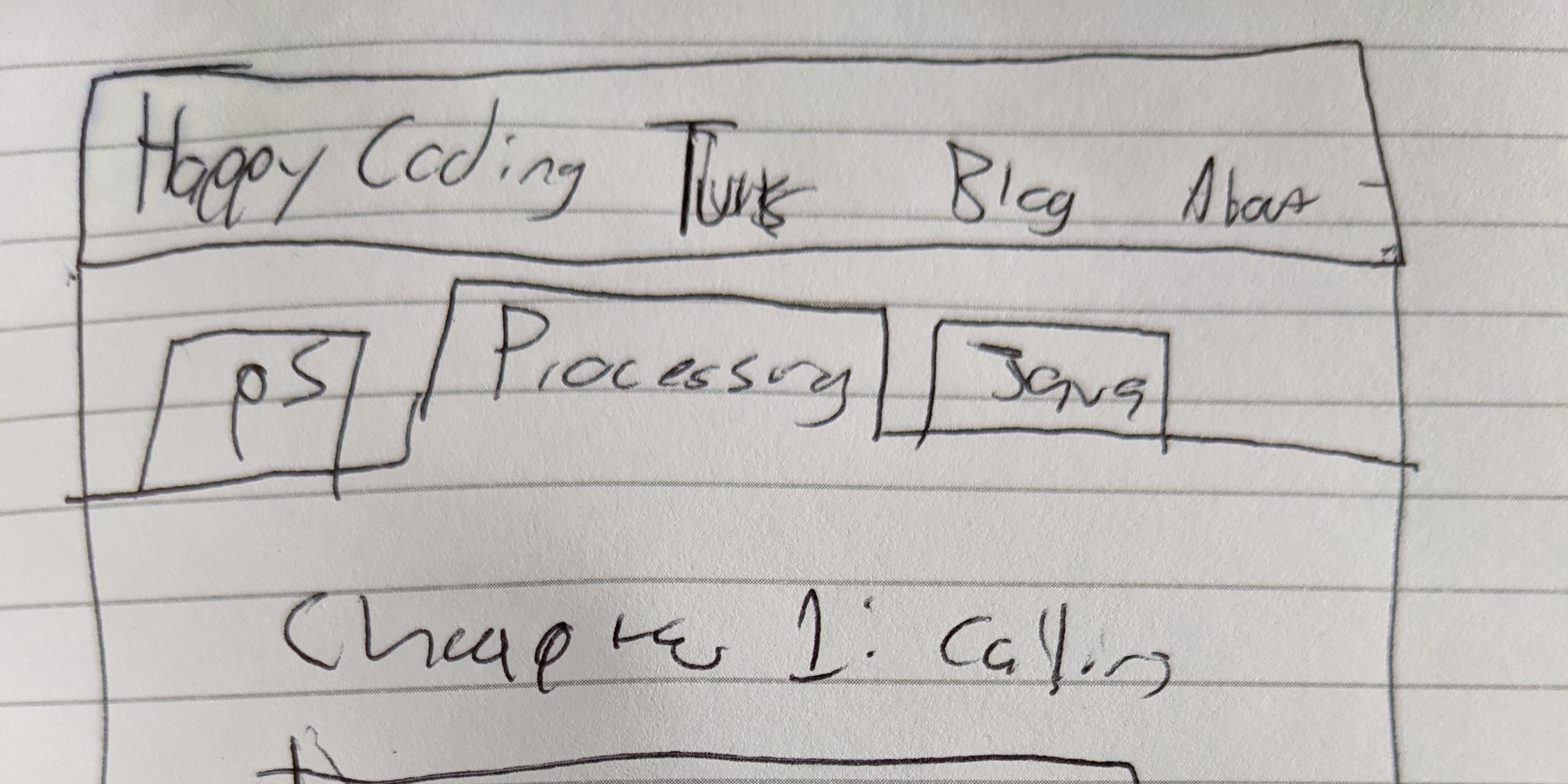 It’s makeover time here at Happy Coding. I’ve been thinking about this for a while, but I find myself going in circles about the same few issues without making much progress, so this blog post is my attempt at talking it through. I don’t have a UX team I can whiteboard with, so typing into a text editor will have to do.

Happy Coding started with an amorphous goal. I wanted a new home for the tutorials that started over at Static Void Games. This new home would also be the home of hobby projects I worked on, which would be examples that showed practical applications of the tutorials. Oh and why not throw in a personal blog while I’m at it. And a forum!

Each of these made sense on their own. I didn’t want the site to be a bunch of theoretical tutorials, so I wanted the examples section to be a first-class citizen. I wanted a place to post random nerdy thoughts, so I added a blog. And more importantly, I wanted Happy Coding to be a community, so I added the forum.

But I’m not sure it ever made sense as a cohesive whole. Some folks come to the tutorials after searching for specific info. Some other folks come to the examples as I post them on Twitter. Others only know Happy Coding as my personal blog.

I’ve been thinking about this for a long time, probably years at this point. But two things recently happened that inspired me to finally do something about it.

The first was the redesign of The Coding Train’s website. I love seeing how much thought they put into understanding their goals, and then making sure the new and improved website got them closer to those goals. And it was done in a genuine way, instead of the shady SEO hacks you usually see with this kind of thing.

The other one was Elon Musk buying Twitter. This has been coming for a while, and I’ve been thinking about what it would look like to quit social media altogether. Is it possible to have an online presence without being at the mercy of a couple soulless billionaires? What would Happy Coding have to look like for that to work?

One or the main issues I’m trying to fix is that right now, the examples section feels very separate from the tutorials section. If you’re learning about calling functions on HappyCoding.io/tutorials/p5js/calling-functions, it’s not obvious that you can jump over to HappyCoding.io/tutorials/p5js/#calling-functions to see a bunch of projects you can tweak and remix to practice calling functions.

I think I like that, because it makes navigating by URL a little more obvious. Maybe I should get rid of the tutorials subpath and move everything up a level? Then I’d have HappyCoding.io/p5js, HappyCoding.io/java, etc. Would it be okay that p5js is on the same level as, say, HappyCoding.io/blog? What about what’s already at HappyCoding.io/teaching?

Do URLs even matter? I like how this idea feels, but am I just bike shedding for the fun of it? Not that there’s anything wrong with that, but do people even look at URLs anymore?

I think I want Happy Coding to feel a little like a skill tree, where working through one layer of the tutorials unlocks a new set of example project. I’m not saying I want to hide things until the user does something, but I want the examples to feel like a result of the tutorials.

This gets complicated, because there isn’t just one path through the tutorials. For example, the Intro to Creative Web Dev course starts with a few p5.js tutorials, then jumps over to HTML, then to JavaScript, and finally back to p5.js. Right now that’s pretty clunky: the main course page contains links to specific tutorials, but those tutorials don’t “know” they’re part of that course. I’d love to find a way to make these journeys more obvious. I might even do something like repeat the same exact content on multiple paths, like HappyCoding.io/intro-to-creative-web-dev/calling-functions might be the same thing as HappyCoding.io/p5js/calling-functions, but with different intro paragraphs maybe?

And where does the community come into play? What would it look like to read a tutorial, play with some examples, and then add your own, or comment on stuff posted by other people? 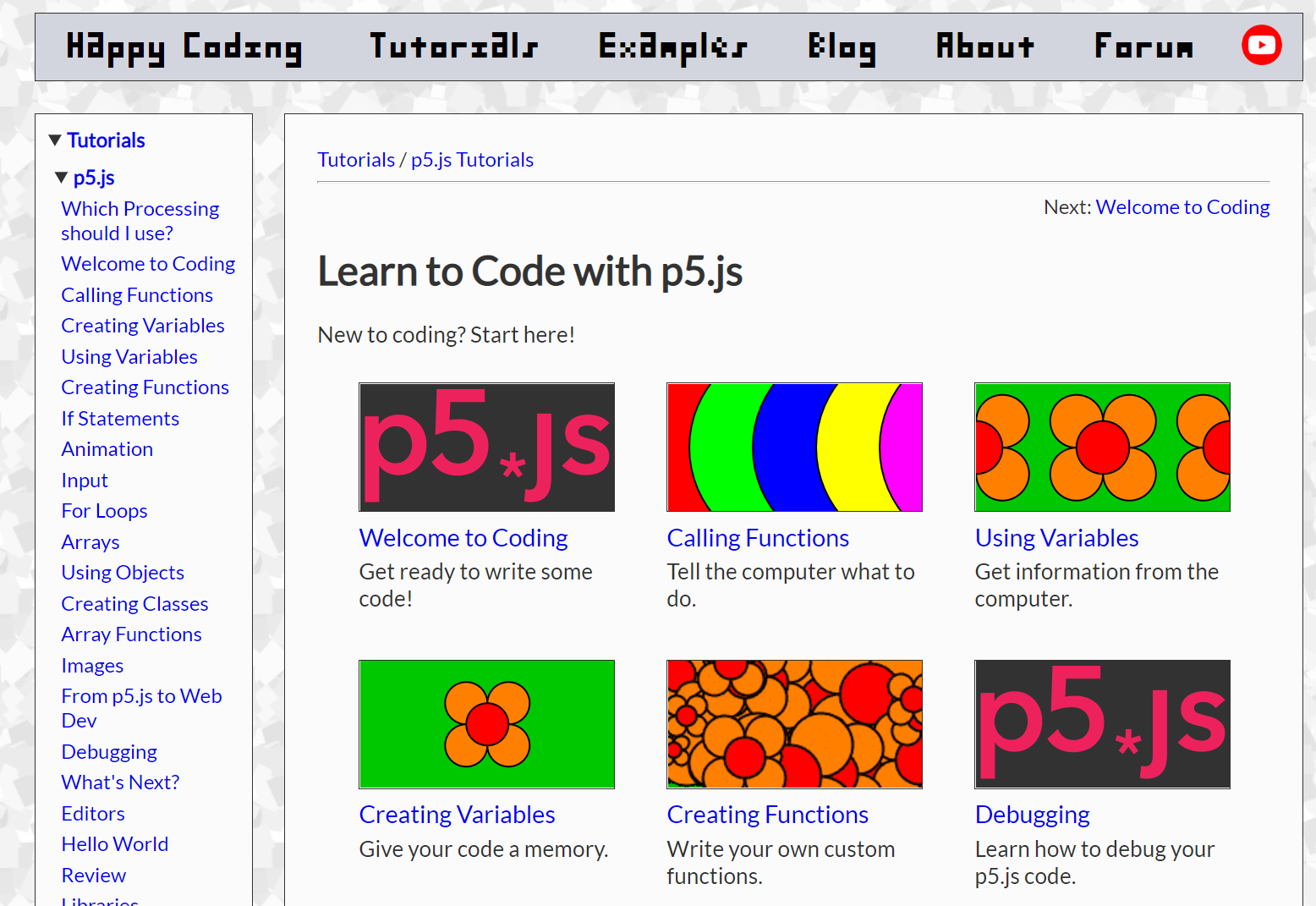 I started hacking at this by rearranging the p5.js tutorial page to make the tutorials bigger, and to include examples below each tutorial.

I think this is an improvement, but there’s way too much going on in one page. Next, I tried adding some styling to separate each “chapter” into its own section. 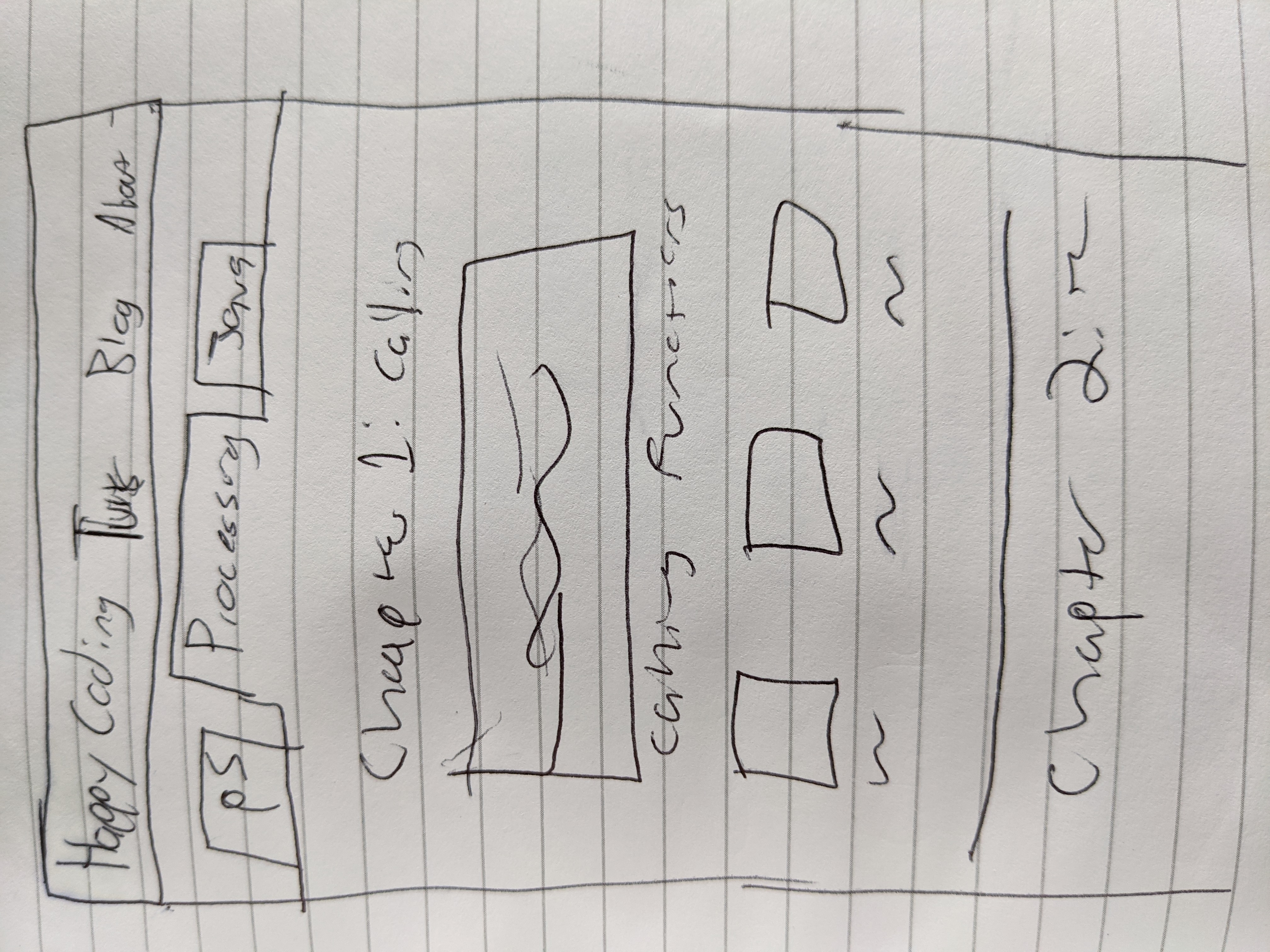 To be honest, I was hoping that writing this would help me rubber duck debug the redesign, that I’d stumble upon the obvious solution and know exactly what to do. But I’m still asking myself the same questions.

I’d be extremely open to suggestions. I’m also considering finding a freelance designer to help think through some of this stuff, so if that sounds like you, get at me!